History of the Fire Department Bell

The men and women of today's fire service are confronted with a more dangerous work environment than ever before, being forced to continually change their strategies and tactics to accomplish the tasks they are called upon to deliver.

While their methods may change over time, their goals remain the same as they were in the past, to save lives and to protect property, sometimes at a terrible cost. This is what they do... this is their chosen profession... this is the tradition of the fire fighter.

The fire service of today is ever changing, but is steeped in tradition, some over 200 years old. One such tradition is the sound of a bell.

In the past, as fire fighters began their tour of duty, it was the bell that signaled the beginning of that day's shift. Throughout the day and night, each alarm was sounded by a bell, which summoned these brave souls to fight fires and to place their lives in jeopardy for the good of their fellow citizen. And when the fire was out and the alarm had come to an end, it was the bell that signaled to all the completion of that call. Eventually, bells become commonplace on the front of apparatus, used as a means of warning the public that a fire apparatus was responding to an emergency call. When a fire fighter died in the line of duty, paying the supreme sacrifice, it was the mournful toll of the bell that solemnly announced a comrades passing.

We utilize these traditions as symbols, which reflect honor and respect on those who have given so much and who have served so well. To symbolize the devotion that these brave souls had for their duty, a special signal of three rings, three times each, represents the end of our comrades' duties and that they will be returning to quarters. And so, to those who have selflessly given their lives for the good of their fellow man, their tasks completed, their duties well done, to our comrades, their last alarm, they are going home.

(from The Last Alarm – Inside the IAFF Bell Ceremony) 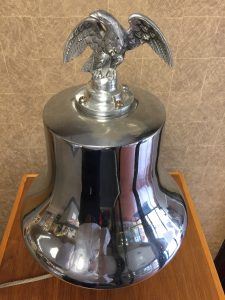 The bell pictured was originally mounted on the front of our 1968 American-LaFrance 80 feet Aero Chief Articulating Platform Ladder Truck. When that truck was replaced in 1995, the bell was removed and the truck was sold at auction. For years, the bell sat in the basement of the firehouse with hopes that someday it could serve another honorable purpose. Well, that day came in August of 2000, when then-Vice President of the South Milwaukee Firefighters Protective Association (IAFF - Local 1633) and Firefighter-Paramedic Tom Reid, responded to an ad placed in the IAFF Magazine looking for a bell to be used at the Fallen Firefighters Memorial in Colorado Springs, CO. FF/P Reid convinced then-Fire Chief Richard Omernik that it would be a noble and honorable cause to have this bell toll for each of the firefighters that died in the line of duty each year at the annual Fallen Firefighters Memorial Service and arrangements were made to ship the bell to Colorado. The bell served this solemn, but prestigious, purpose until the memorial park was redesigned in 2015 and the bell was, once again, retired.

During it's time, it would toll for 2,162 fallen firefighters, including the 343 that died in the attack on the World Trade Centers in New York City. The bell now stands on display upon it's pedestal in the front lobby of the South Milwaukee Fire Department firehouse.